What is restorative justice?

In the criminal law context, restorative justice is an approach to justice that involves the victim, the offender and other members of the community who may have been impacted by the crime. It may take on many different forms, and in some cases, may be focused only on the offender (known as transformative justice). A restorative justice approach seeks to repair the adverse effects of crime in a manner that addresses the root causes of crime. It seeks to address the needs of the victim ,the meaningful accountability of offenders and other members of the community who have been impacted by the offense, in order to create healthier and safer futures for all those affected.

The underlying principle of restorative justice is the understanding that crime causes harm to people and relationships and affects the community. Three beliefs flow from this: 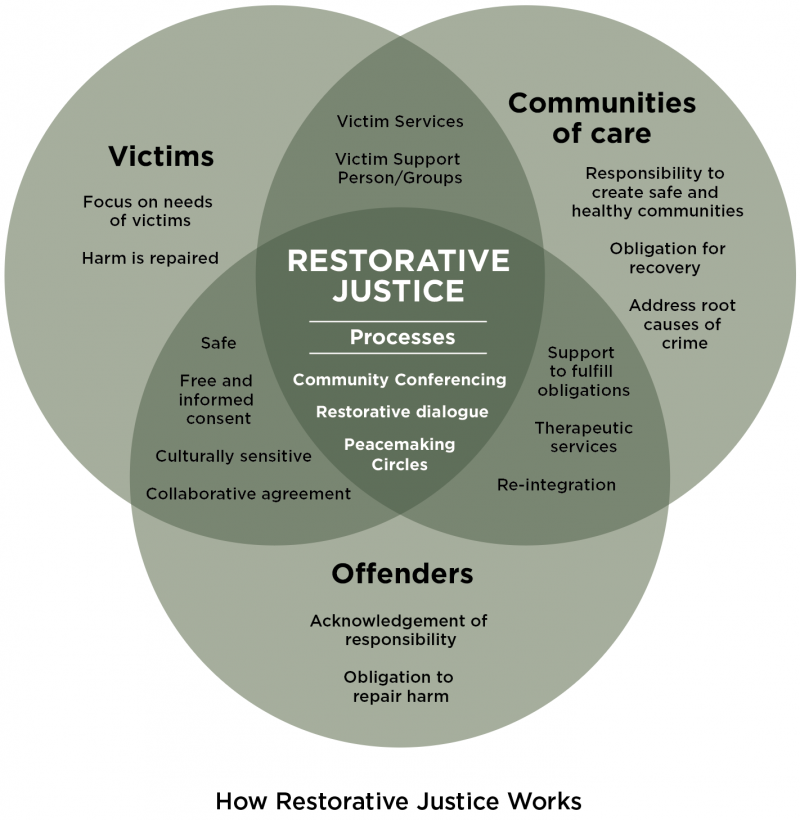 While recognizing that the origins of restorative justice are grounded in Indigenous practice and law, its principles and framework for healing the harm that arises from a crime can be applied to non-Indigenous justice system participants. Both Indigenous-specific agencies and non-Indigenous agencies will participate in this project. However, agencies may choose to accept or refuse any individual referred to their program, depending on their criteria.

Any Indigenous person participating in a restorative justice process will have a say in the agency to be used and the specific cultural practices to be employed.

What is the legislative
authority of restorative justice?

The use of restorative justice in criminal matters is supported through both federal and provincial legislation. For adults, section 717 of the Criminal Code authorizes the diversion of matters from the formal criminal justice system by the use of alternative measures. Restorative justice falls under this category. For alternative measures to be used, the offender needs to accept responsibility for the offence and the referrals must not interfere with the protection of society.

Where an accused pleads guilty, or is found guilty of an offence, section 718 articulates several relevant objectives of sentencing, including:

(e) that sentencing should provide reparations for harm done to victims or the community, and

(f) that a sentence should promote a sense of responsibility in offenders, and acknowledgment of the harm done to victims or to the community.

Restorative justice is also referenced in section 8 of the Alberta Police Act and the federal Victims Bill of Rights.